7 absolutely awesome things to do on the Dingle Peninsula drive 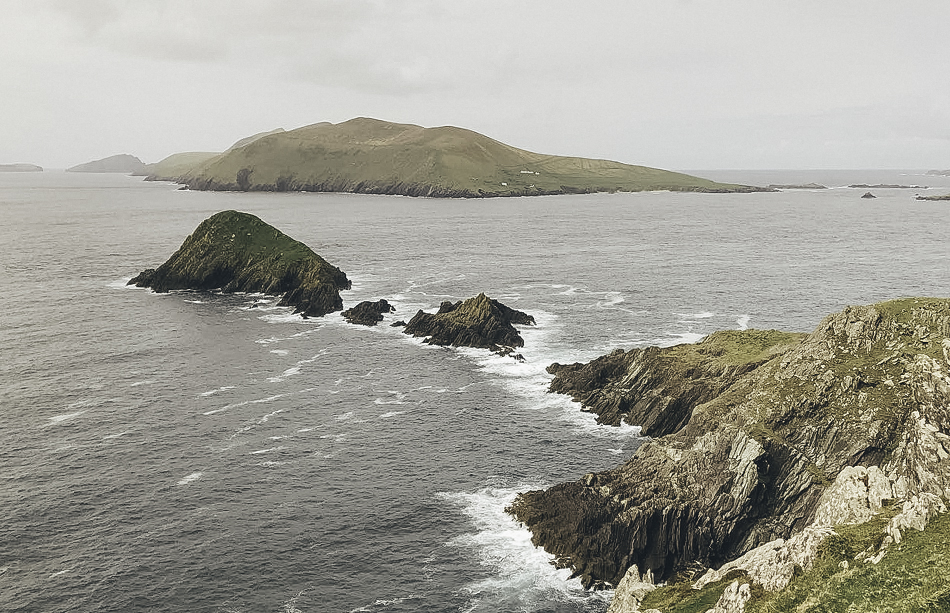 Along the Atlantic in the southwest of Ireland, the siren call of craggy coastlines, green meadows and quaint villages lured us to the Dingle Peninsula. (Though we almost missed her luring tunes as they were mostly drowned by my own singalong attempts to Ed Sheeran’s Happier… but that’s a tale for another time)
While planning a trip to the wilds of rural Ireland, we found ourselves with the choice of spending a day driving the Ring of Kerry or driving the Dingle Peninsula. Unable to decide between the two we just did them both, skipping Dublin altogether instead (cuz we’re greedy like that). 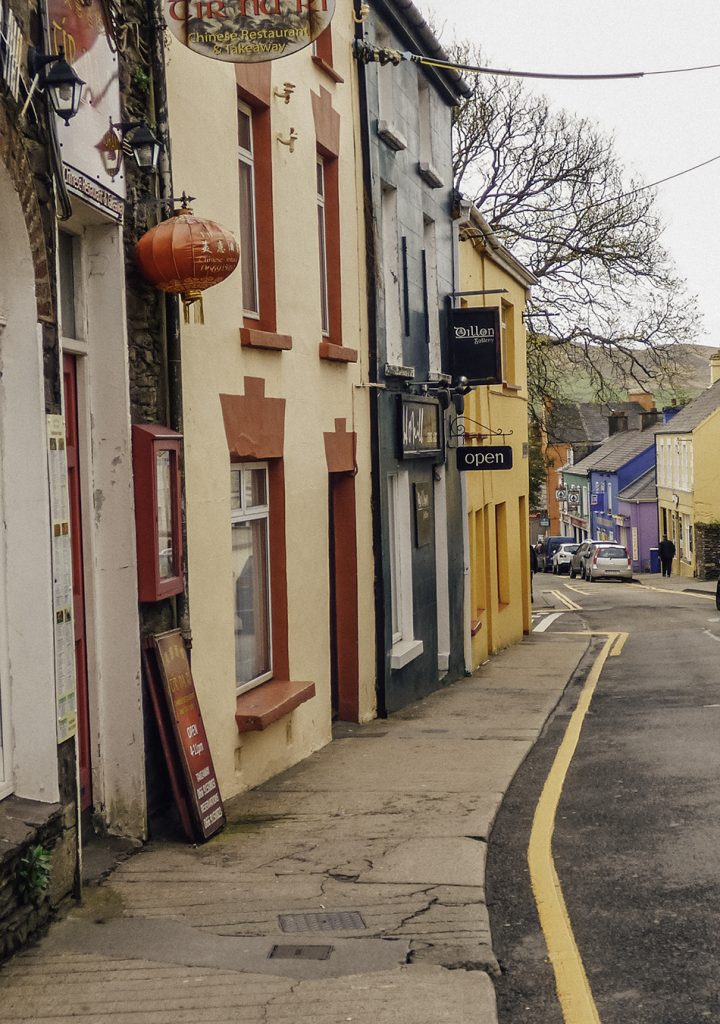 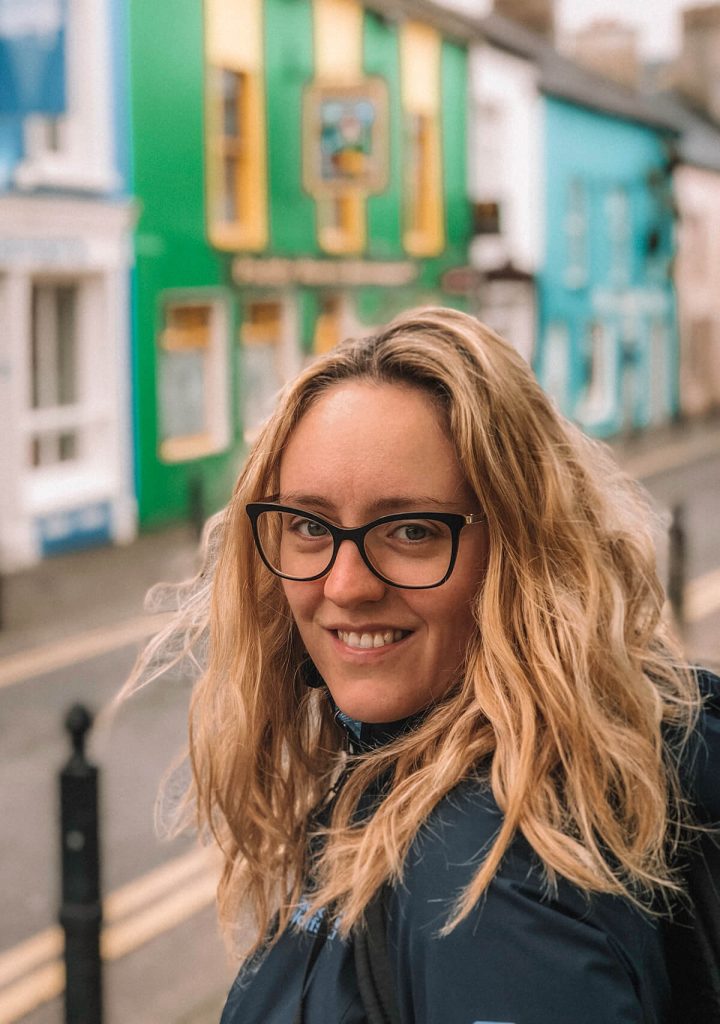 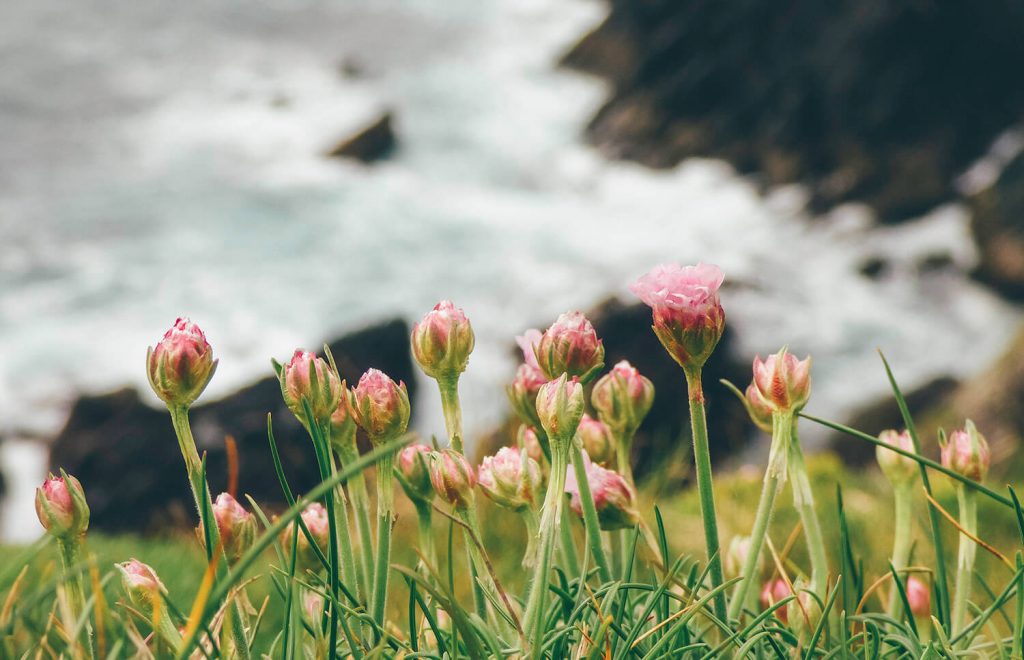 So after having had our fill of all the awesomeness the Ring of Kerry had to offer on the previous day, we moved up one peninsula north to the Dingle Peninsula and continued our rural Ireland gluttony spree. Driving the Dingle Peninsula is a clear must on any Ireland road trip itinerary!
Hey, visiting Ireland soon? We have loads more posts to help you plan your trip! Check these out:

What to do on a Dingle Peninsula drive

The Dingle Peninsula juts into the sea and seemingly takes you back to a simpler time where sheep-filled fields are the local’s main priority. It is packed to the brim with striking ocean views, fantastic hikes and even a bit of Hollywood!
MAN… I fell head over heels for those green patchwork quilt fields and hipster sheep. They looked like very happy sheep. 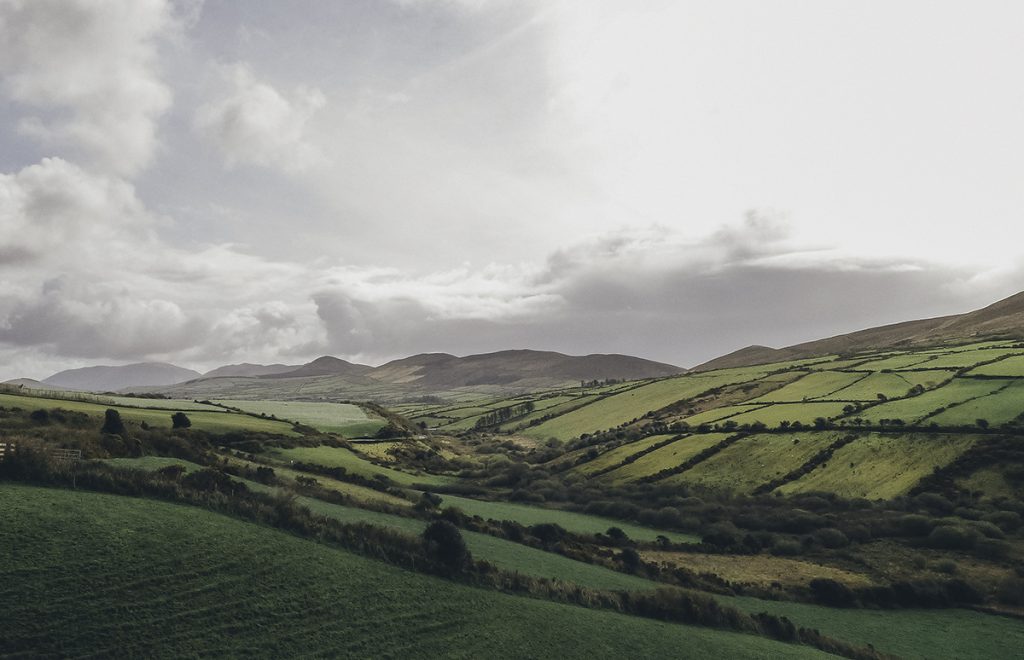 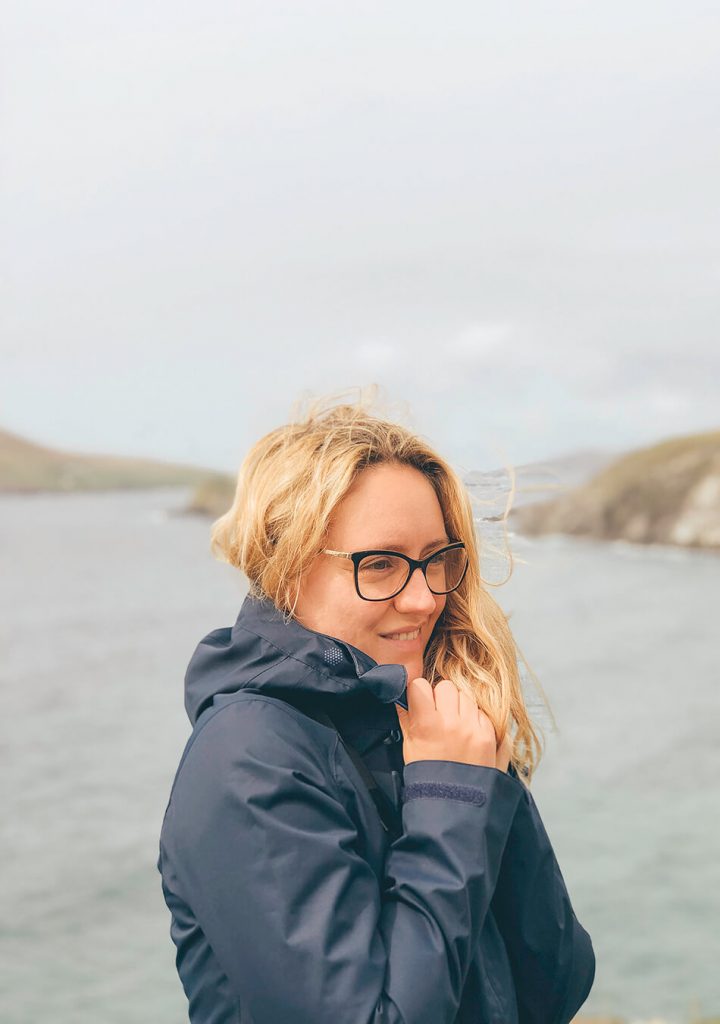 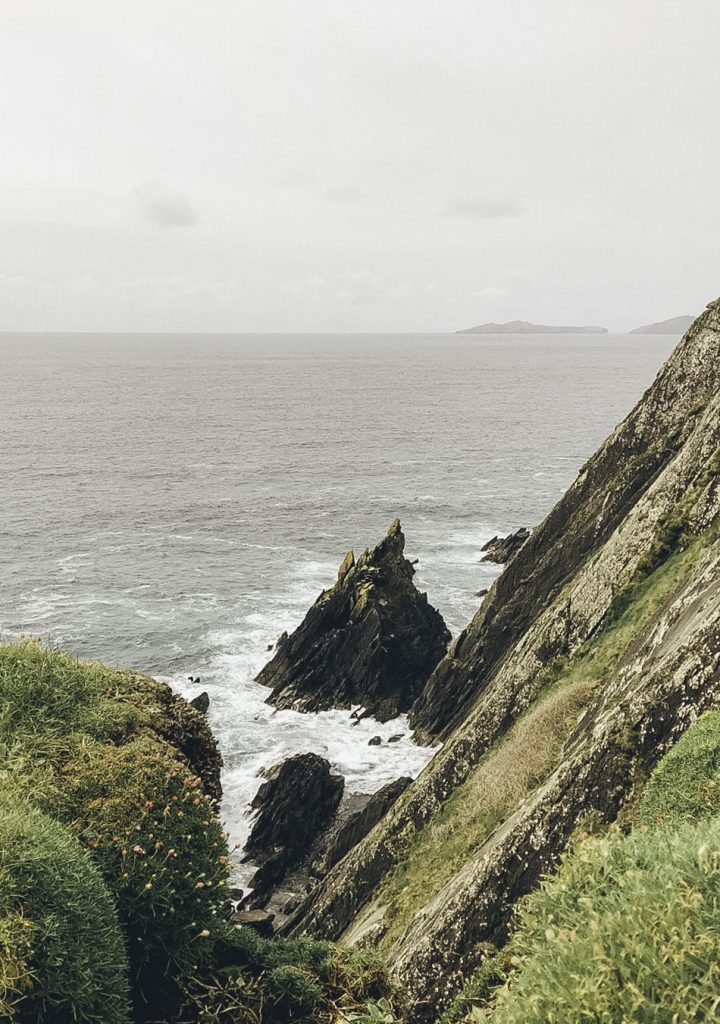 As we left Kenmare for the Dingle Peninsula, we chose to drive along the north coast of the peninsula on the N86. Everywhere you look are vibrantly green fields with farms nestled throughout them, bathing in the shadows of the overcast sky. When I think of Ireland, this is what I visualize in my imagination.

Brunch in the colorful town of Dingle

Having spent two hours driving from Kenmare to Dingle, we were really looking forward to second breakfast. (Why is this only a thing in Hobbiton again?) And Dingle hit it right on the head. Seriously, I’m literally drooling all over my keyboard right now thinking back of those yummy avocado and salmon toasts and deliciously velvety hot chocolates *sigh*. We had our brunch-gasm at Goat Street Social but if you happen to be in Dingle on a balmy day you might want to stuff your face in the garden of Pantrí. (We won’t judge your extra-ness)
You can walk those calories right off by browsing the adorable Dingle streets (Nope, not really). Lovely little Dingle stole my heart. Dingle is a small town on the southwest tip of Ireland and it’s is just the cutest place I’ve ever seen. Every time I took a corner there was another brightly colored building turning me all giddy and excited again.
For food lovers who like the quirky stuff (AKA us) Murphy’s Ice Cream in Dingle sells interesting flavors like sea salt, Irish coffee (with whiskey) and Caramelized Brown Bread. Saucy Chocolate Cookie is top notch and a MUST try! 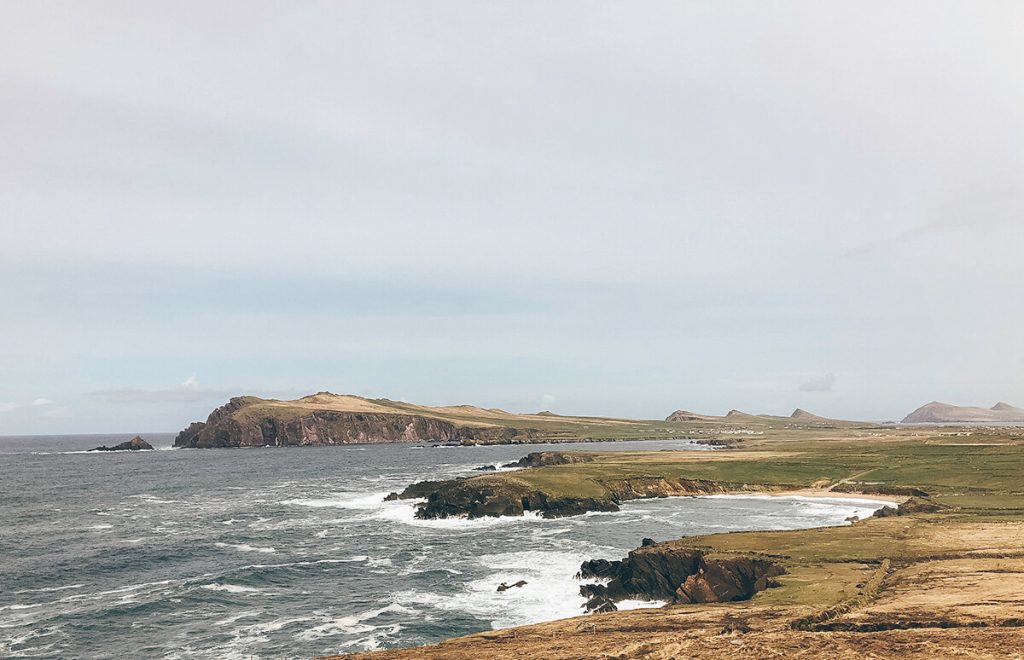 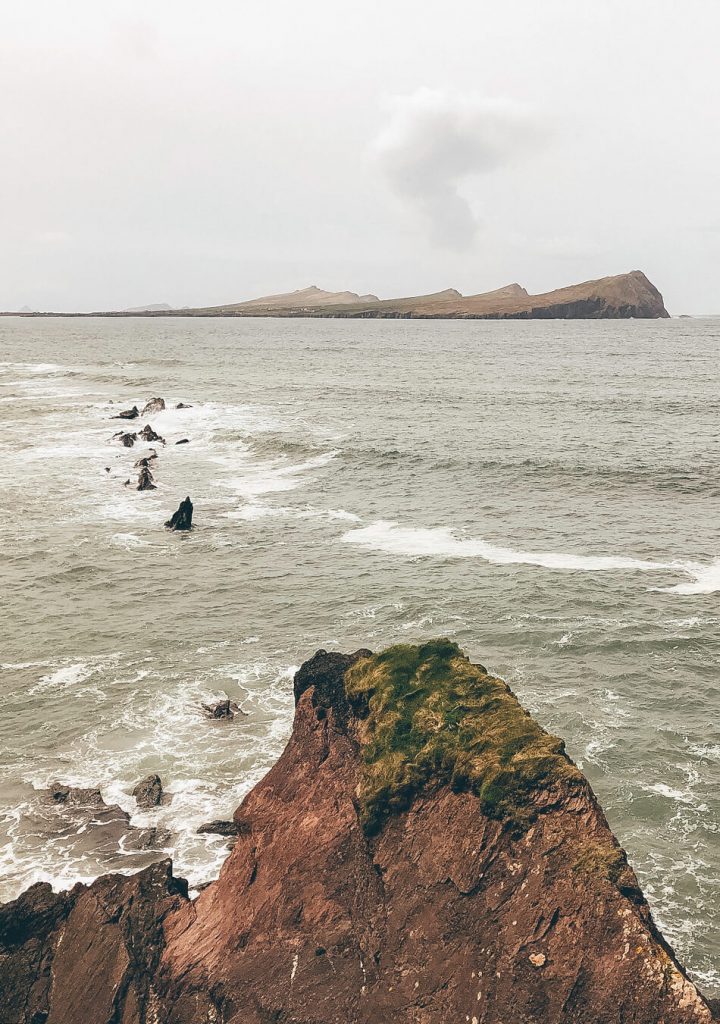 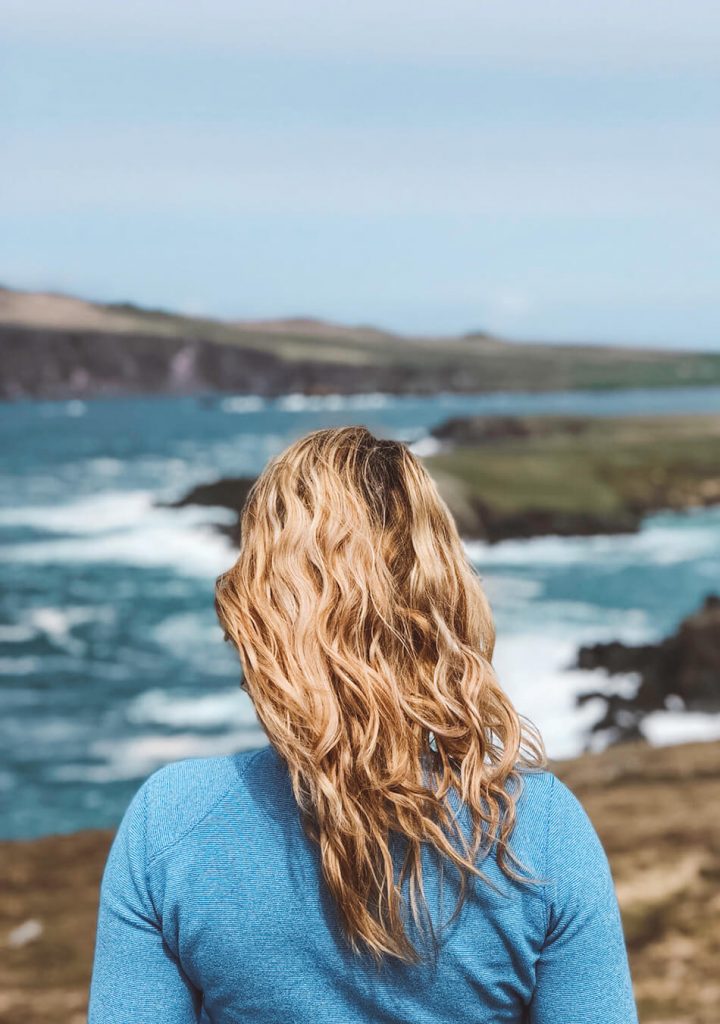 Okay, be prepared to get your mind blown because you’re about to embark on the most picturesque drive in Ireland. Dingle town is as cute as can be but no trip to the Dingle Peninsula is complete until you’ve taken in the prettiness of the Slea Head Drive.
The Slea Head Drive is a circular route that mostly hugs the gorgeous western Ireland coastline for 30 miles (47 km) and roughly takes about 3 hours to complete, depending on the numbers of stops you make. So bag yourself a picnic lunch, enjoy yourself and be ready to fall head over heels in love with the Irish coast.

You’re in for a treat as the entire coastline between Slea Head (marked with a giant white crucifix) and the Blasket Islands carpark is simply breathtaking. I recommend you pull out whenever possible to enjoy the sweeping views. Unless you’re a particular breed of nature haters, in which case, I do NOT understand you.
If you’re enjoying Slea Head Drive on a traditional Irish day—wet and (increadibly) windy—you can see the waves “riding in like white horses”. But on a sunnier day, pull into the little parking lot at the Dun Chaoin sign to view the Blasket Islands.
As we were travelling out of high season, the daily ferry trips to the Blasket Islands weren’t an option for us (and they were kind of pricy). But fear not my backpacker budget and off-season friends! Instead there is a beautiful hike that leads you to the very tip of the mainland, where you can gaze out at the gorgeous seascape. 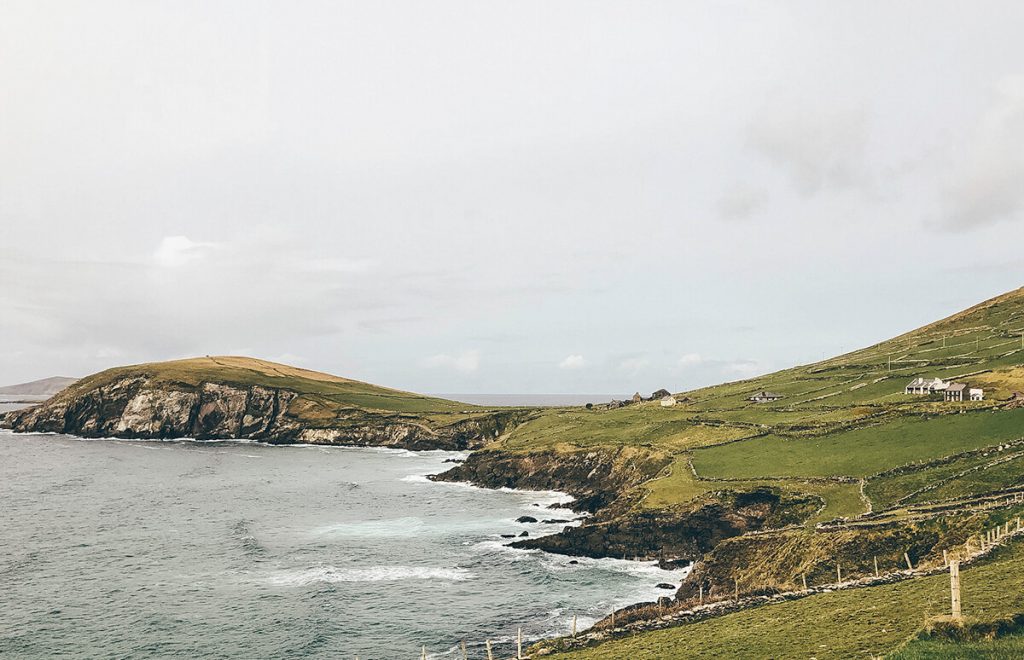 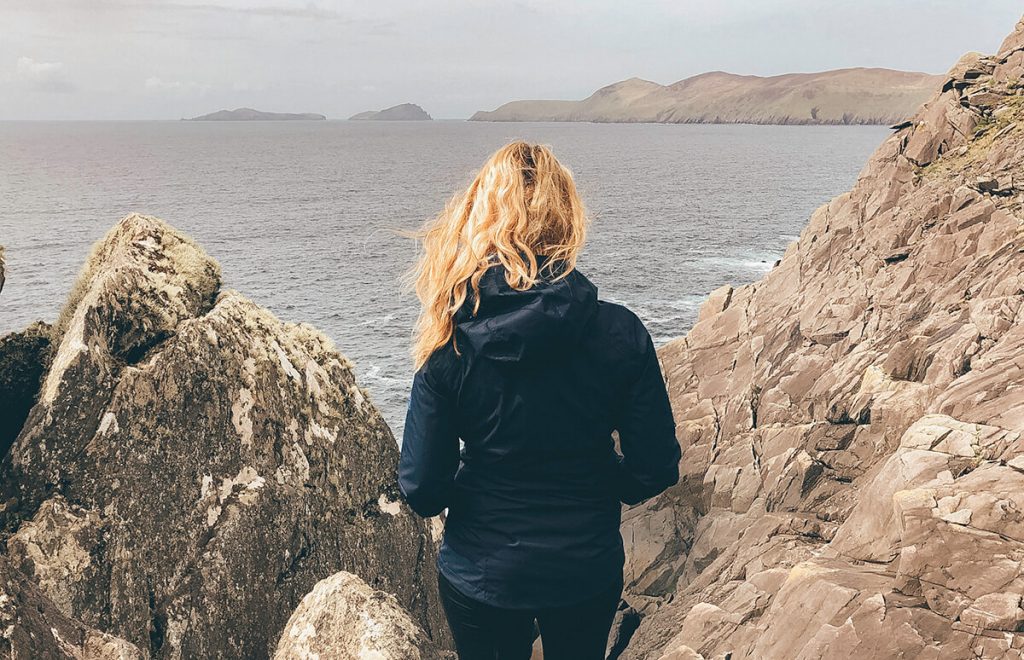 Just past the carpark there is a grassy path leading up a steep –sheep-poo filled– hillside. It’s a short but rather steep climb and was once again stoked that I wore my Hunter Boots that day. We threaded amongst the grazing, sleepy sheep finding our way through the grass peppered with droppings in our attempt to find a striking lookout over the Blasket Islands. This is the westernmost point of Europe, lying nothing but the Atlantic between you and the US.
We were the only ones up there to enjoy these stunning views, which just made it extra special. There is an honesty box that asks for 2€ as the hike takes place on private property. Oh and please, don’t be a douche and pay the damn 2€.

For a bit of Hollywood on your Dingle Peninsula drive, head to Sybil’s Head or Ceann Sibéal. If you’re a Star Wars aficionado then you probably already know that Episode VIII, The Last Jedi, was partly filmed in Ireland (note: we didn’t. At all. I blame my mom for making me watch The Sound of Music instead). Nothing of the set remains but the scenery here is absolutely stunning, which was what made us pull over in the first place.

Three Sisters and a Sleeping Giant

Near the village of Ballyferriter, you’ll want to grab the scenic pull-out for a spectacular view. The Three Sisters are a set of three peaks gracefully rising out of the Atlantic, with some rustic pastures and farms perfectly adding charm to the tranquil composition. Though these peaks are associated with a number of Irish legends and stories, it is the history of the area that left a lasting impression. 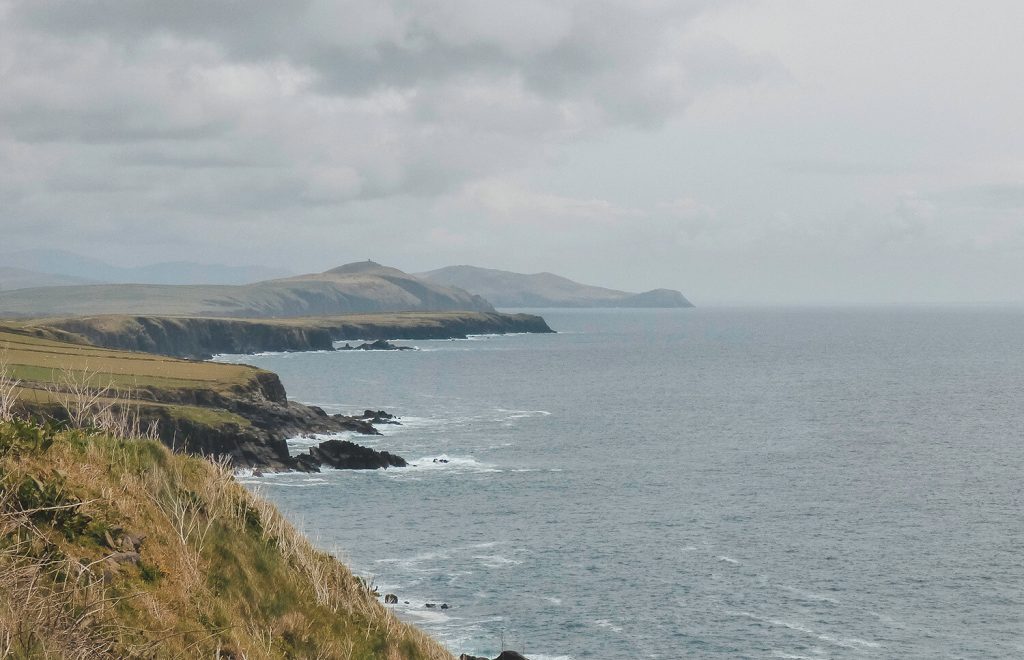 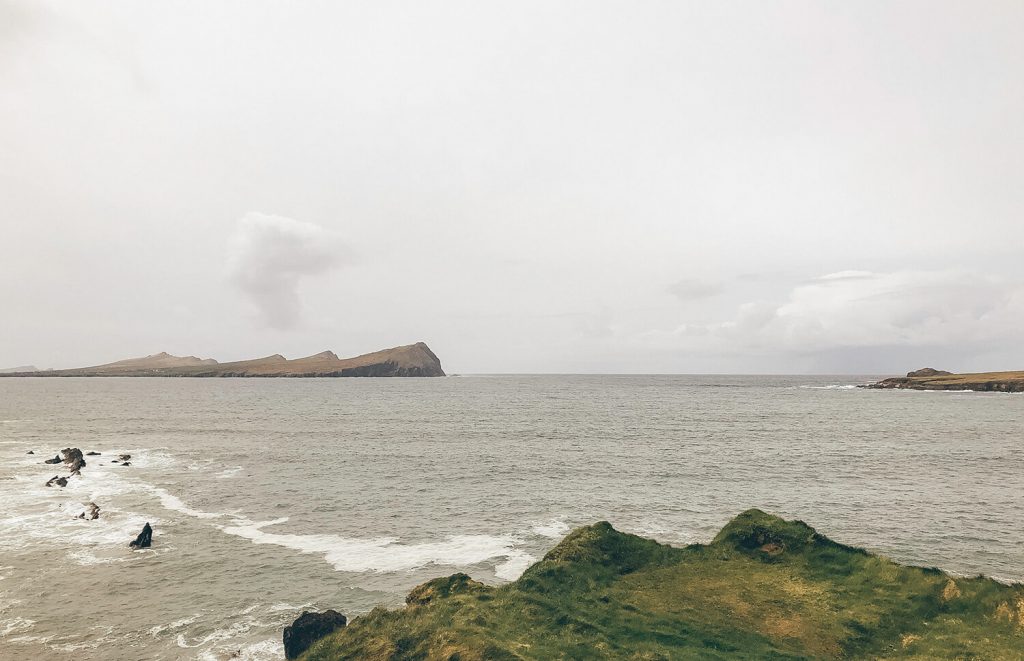 The top fields surrounding you have been untouched since the planting of 1845, when the potatoes didn’t grow but instead rotted in the ground. A famine drastically reduced the 40.000 people inhabiting the Dingle Peninsula to about 10.000 still living here today. The Great Hunger caused the death of 1 million Irish and about 1 million more emigrated, causing the Emerald Island’s population to fall back by 20%.
Meanwhile, we were supposed to spot a Sleeping Giant, lazily drifting on his back in the ocean, but completely missed it. Wait what? Yeah we were confused too. Apparently the northernmost of the Blasket islands looks like a dead man or sleeping giant when spotted form the east.

The Conor Pass was ideally located on our route towards Doolin, our launching point to see the Cliff of Moher on the next day of our trip. It is one of Ireland’s highest mountain passes and is a long winding, one lane road. The views were nice but not the best we’ve seen on this roadtrip. If, like us, you’re heading to the Cliffs of Moher next, you can easiliy fit it into your itinerary as it is on your route. If you are short on time however, the Conor Pass is skippable. 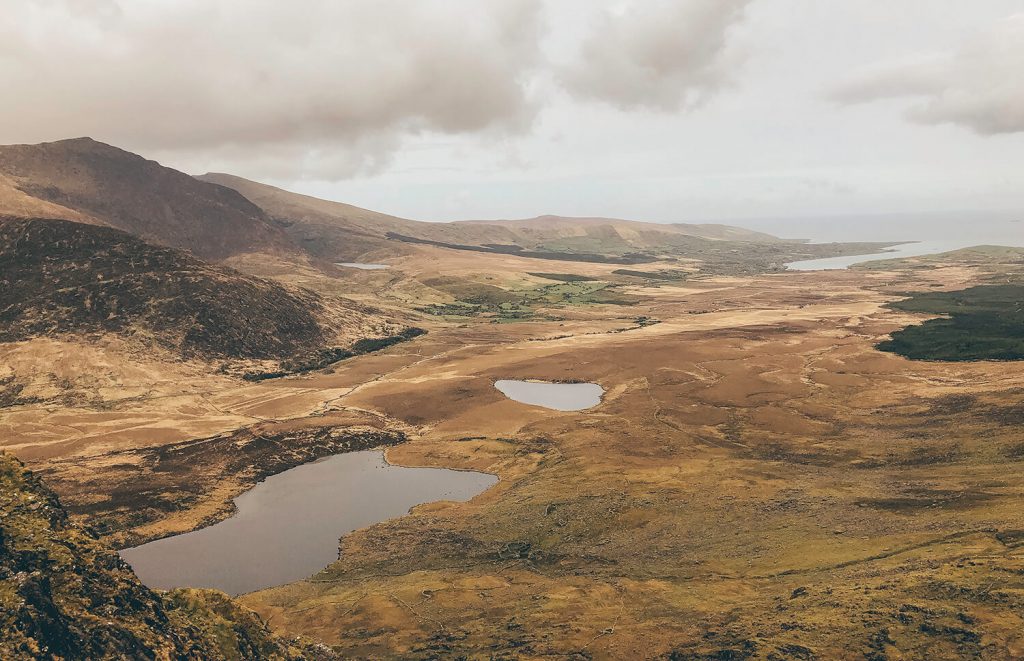 The Ring of Kerry or the Dingle Peninsula drive?

If you only have time for one scenic drive during your stay in Ireland, we would pick the Dingle Peninsula drive as the clear winner. Both drives are gorgeous but the seascape views on the northern peninsula were more breathtaking and we found Dingle to be a cozier town than Kenmare. There is a draw the Dingle peninsula drive has that is indescribable and will become one of the coziest and fondest memories of your Ireland trip!

We stayed at a cozy Georgian Airbnb in the heart of Kenmare and did the Dingle Peninsula drive on our way to the Cliffs of Moher. We highly recommend this Airbnb when you’re traveling as a couple. New to Airbnb? Subscribe here and get $40 off your first booking! 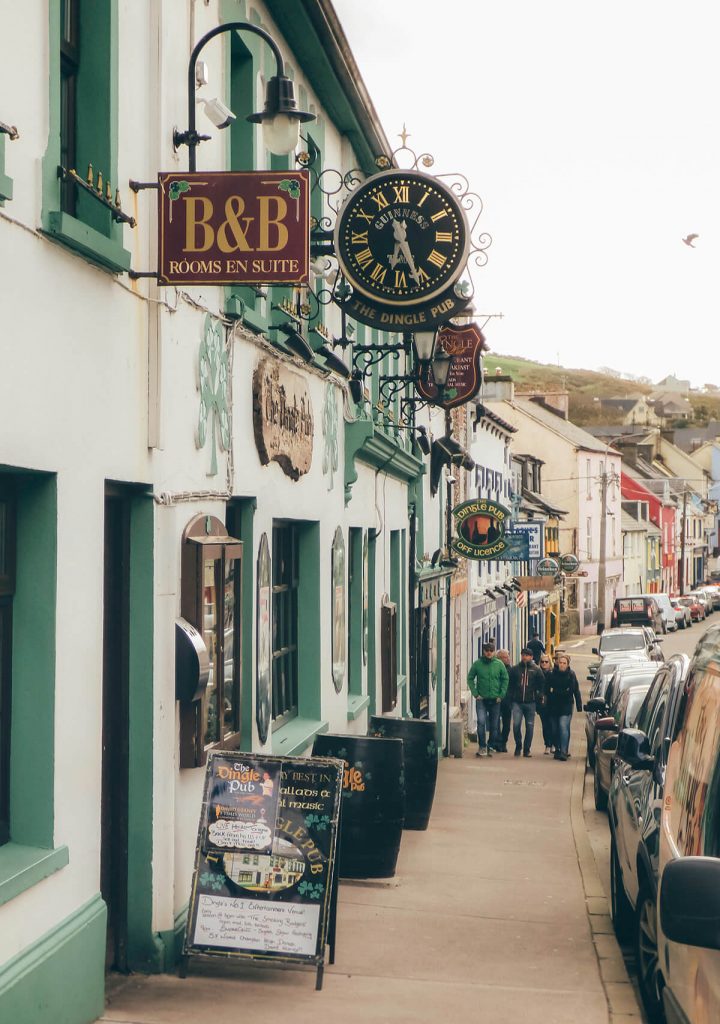 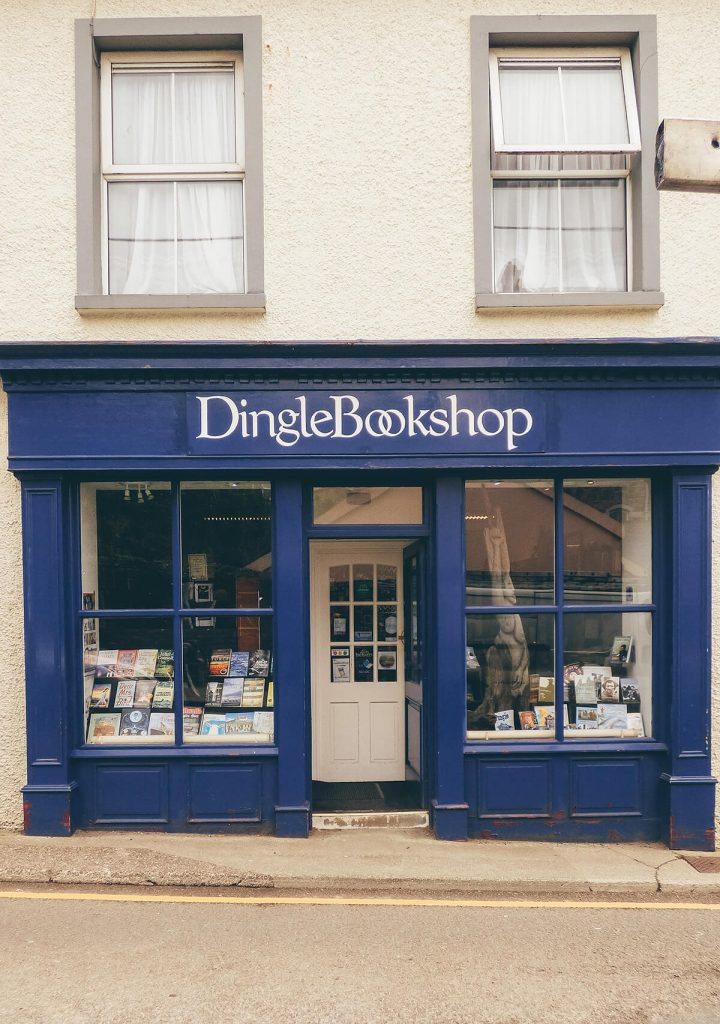 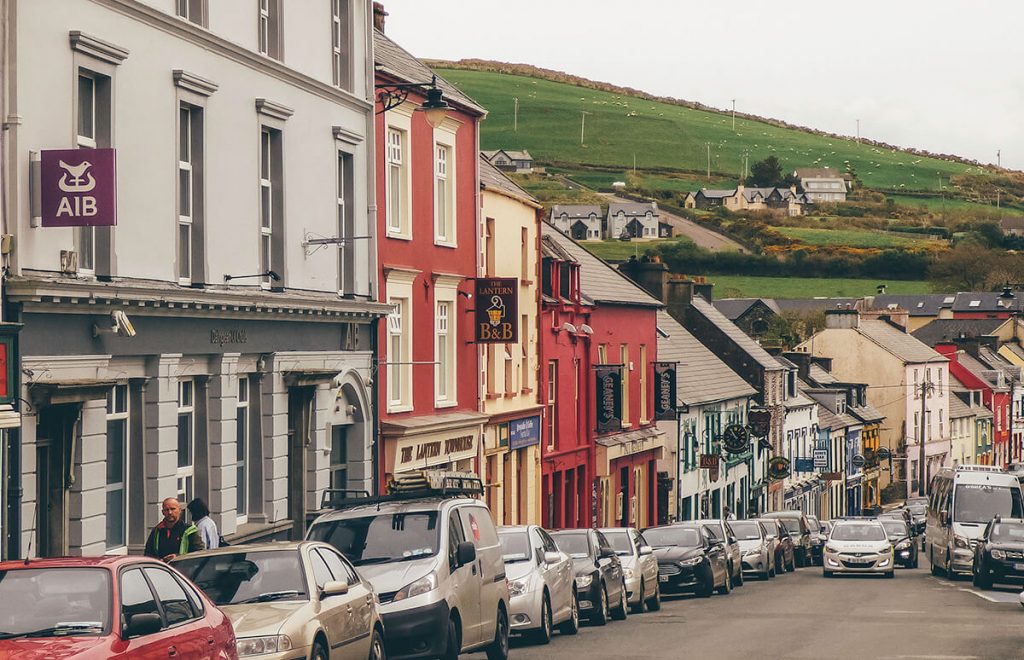 Psst, visiting Ireland soon? We have loads more posts to help you plan your trip! Check these out:

What do you think? Have we convinced you to tackle the Dingle Peninsula drive? Let us know in the comments below! 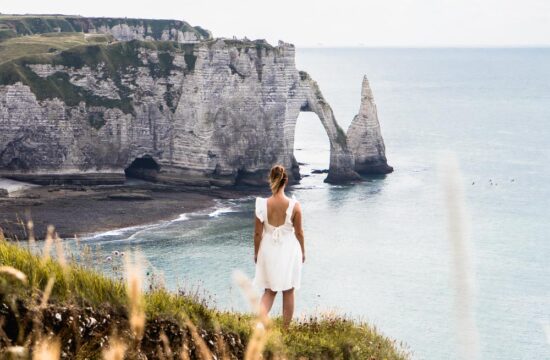 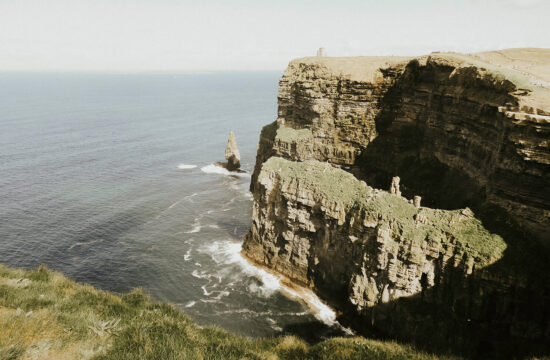 Fall in love with Ireland at the Cliffs of Moher 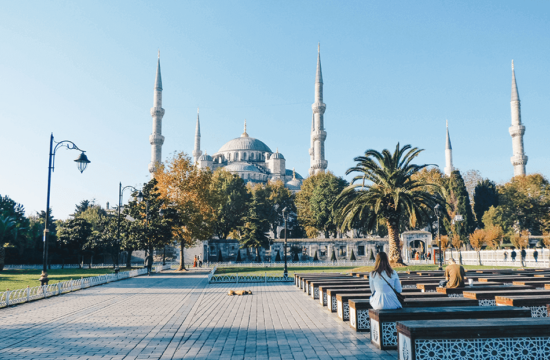 What to do in Istanbul: the ultimate guide!

10 easy ways to make driving in Ireland a breeze!

11 zero waste travel essentials for under $40

Good post. I learn something new and challenging on websites I stumbleupon everyday.
It’s always interesting to read through content from other
writers and practice something from their sites.

thank you so much for your kind words!

This website uses cookies to improve your experience while you navigate through the website. Out of these cookies, the cookies that are categorized as necessary are stored on your browser as they are essential for the working of basic functionalities of the website. We also use third-party cookies that help us analyze and understand how you use this website. These cookies will be stored in your browser only with your consent. You also have the option to opt-out of these cookies. But opting out of some of these cookies may have an effect on your browsing experience.
Necessary Always Enabled
Necessary cookies are absolutely essential for the website to function properly. This category only includes cookies that ensures basic functionalities and security features of the website. These cookies do not store any personal information.
Non-necessary
Any cookies that may not be particularly necessary for the website to function and is used specifically to collect user personal data via analytics, ads, other embedded contents are termed as non-necessary cookies. It is mandatory to procure user consent prior to running these cookies on your website.
SAVE & ACCEPT
1.9K Shares
Pin1.9K
Share12
Tweet
Flip
Pocket